25.01.21 - The list of Germany’s so-called households with poor access to modern data networks is still quite long, despite the German Government’s Digital Agenda, claiming that the NGA-Networks („Next Generation Access“) were supposed to be made available to the whole country by the end of 2018. This is not a great surprise, as the time from the application being sent to the German Support Programme for Digitalisation up to the surf start on home computers being stretched to the limit, much longer than expected. 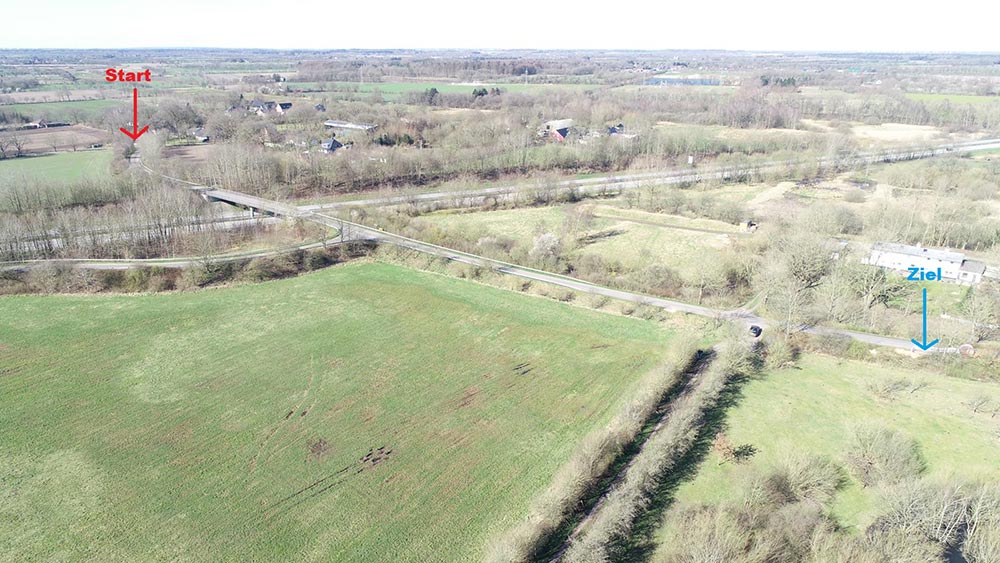 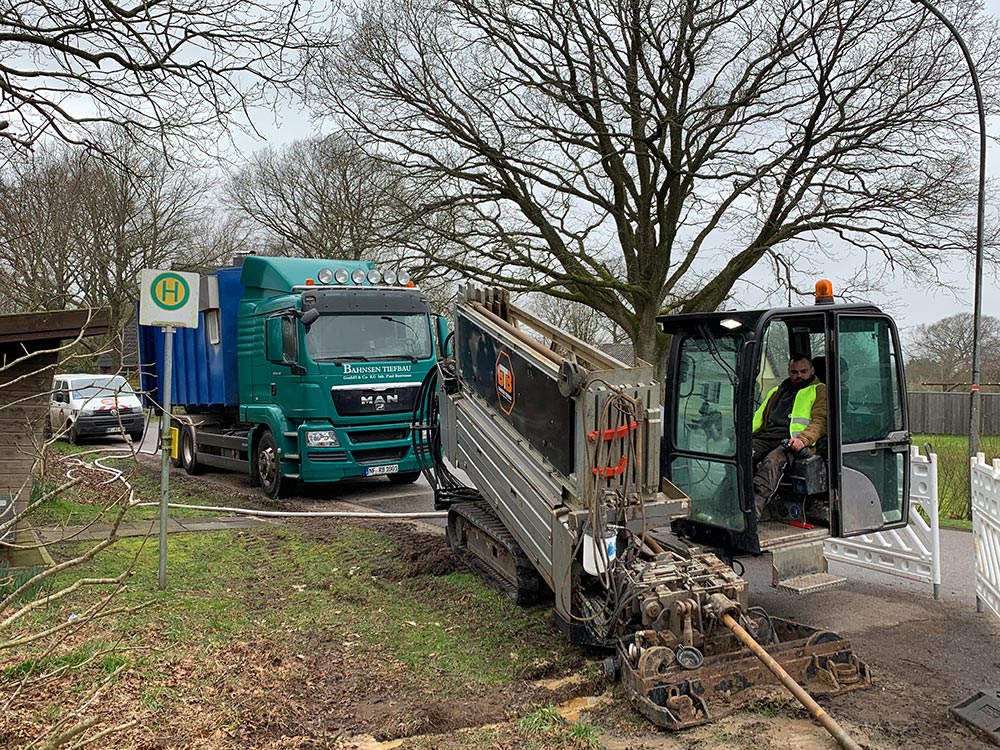 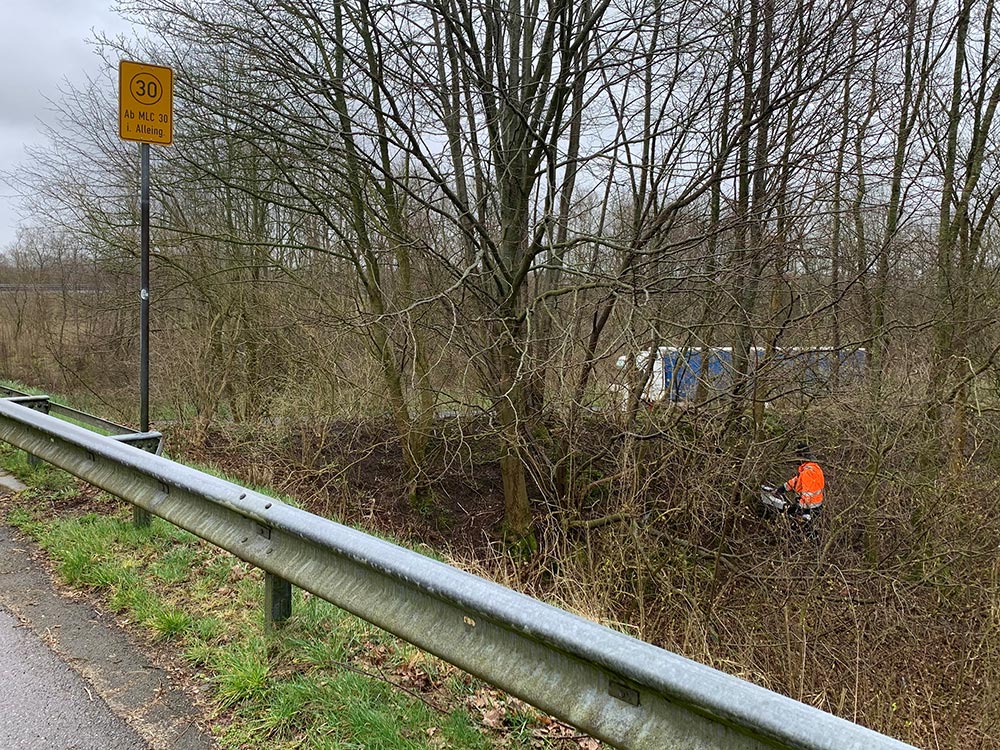 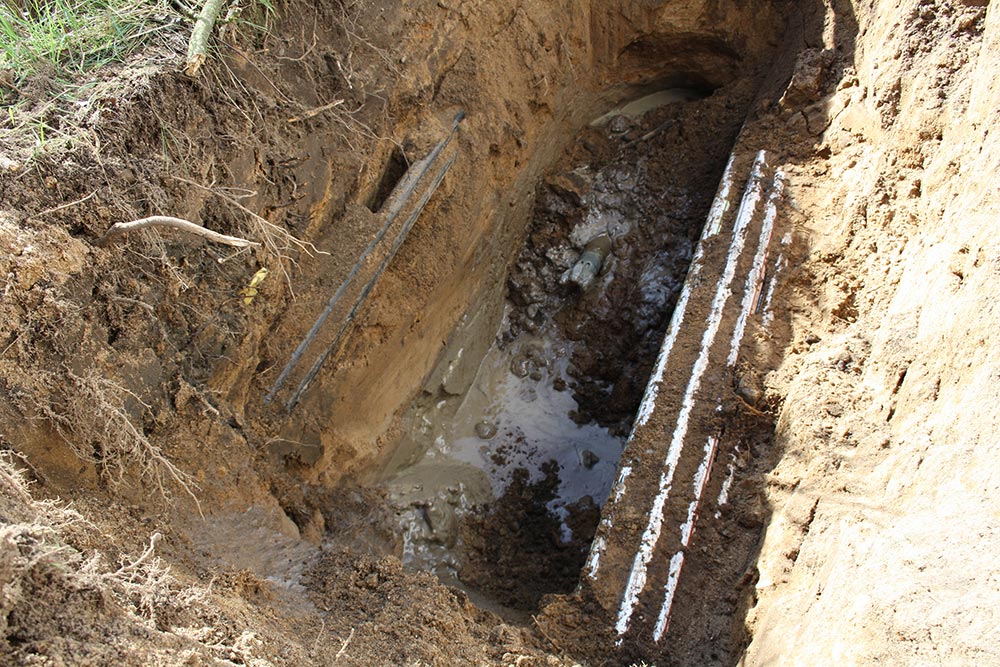 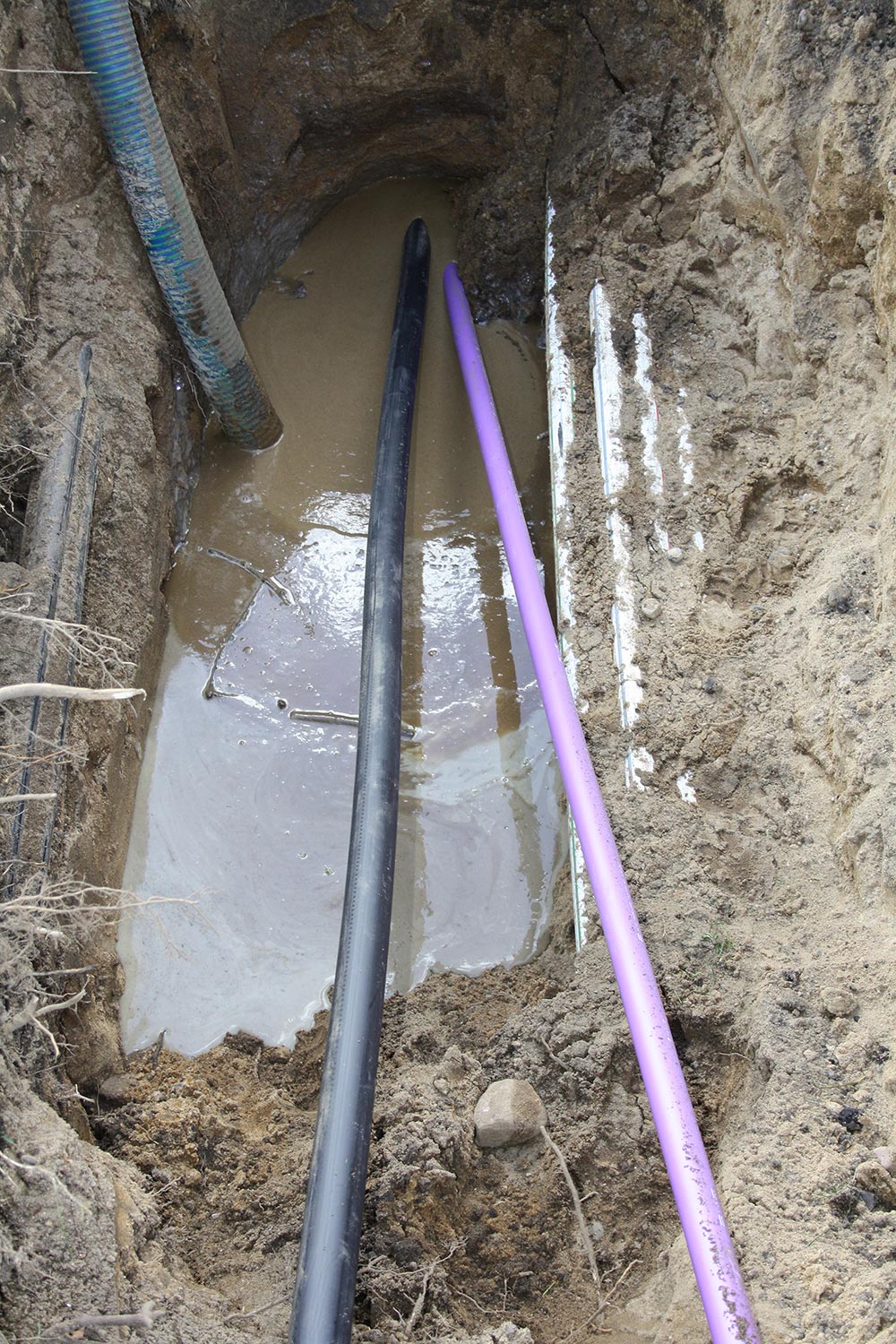 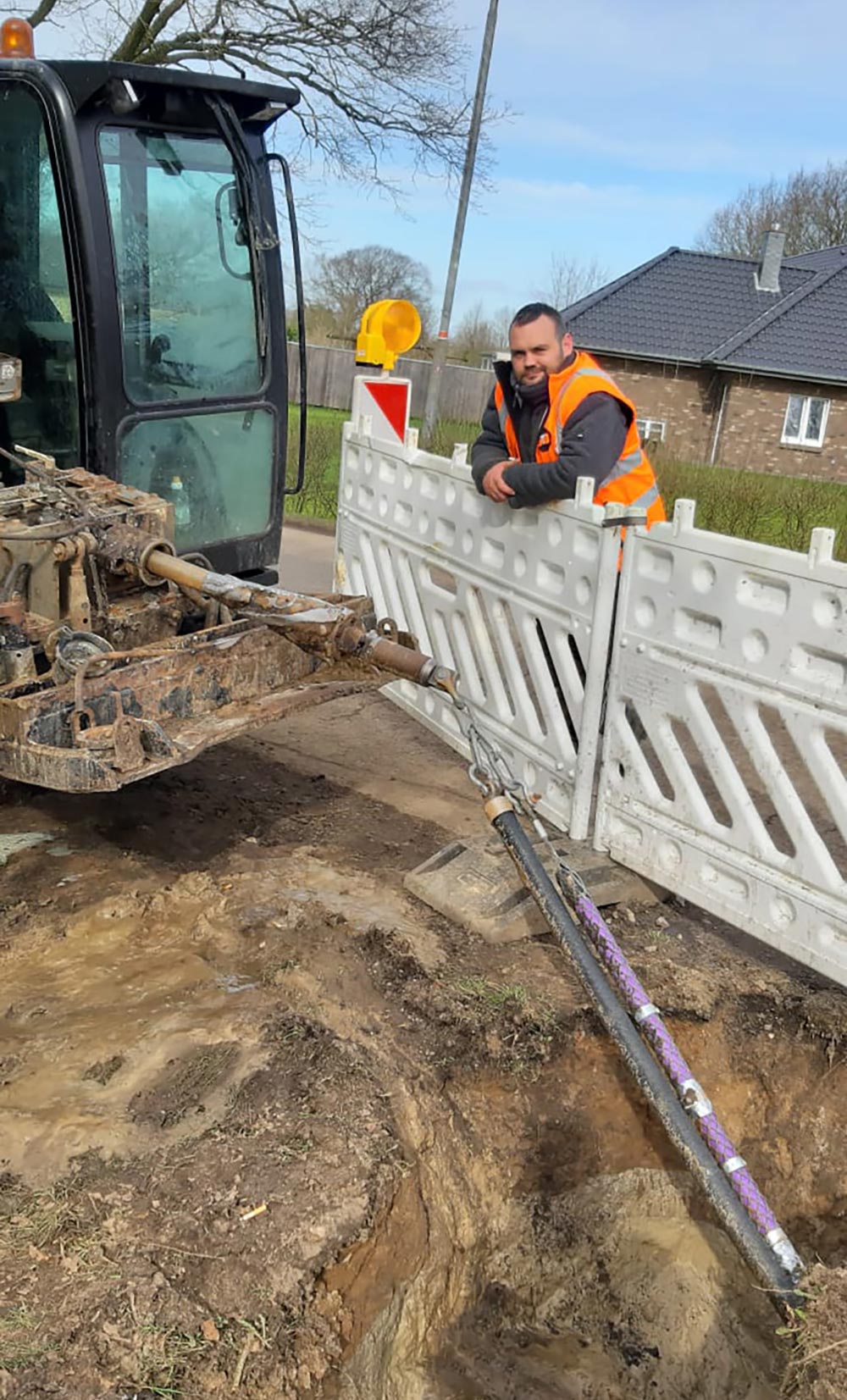 The Handewitt region, in Northern Germany near the city of Flensburg, is one of these regions with poorly supplied households. Three years ago, the „Project Glass-Fibre Extension“ was launched and in February 2020 the practical measures requested started to take shape. The provisions for the set-up of a FTTB/H-Network were published. The relevant extension area covered approximately 1.000 households in all 8 villages in the region – an area of 7.800 ha.

HDD crossing underneath a major motorway

The MRK Media AG, Head Office in Munich, is the contracted planning office for this task. On behalf of Datacentre Flensburg-Handewitt GmbH, they were asked to also plan and carry out the installation of HDPE pipes OD 50 and also Multipipes OD 50 (24 x 5) for the redundant connection of partial networks directly to the Backbone.

At first glance, this did not seem to be anything spectacular, but at second glance it turned out to be just that. The reason: the planned, almost 470 m length bore path, runs from the small village of Gottrupel close to the Scandinavian Park in an open terrain heading to the East. Here it crosses the four-lane A7 North-South motorway and then further on through open terrain again. Access to the motorway, in order to carry out measurements with a directional drilling detection system, which would have been obligatory, as well as accessing the areas used for farming in open terrains, were strongly prohibited.

It was a clear case: Installation of the pipes underground with the HDD method, therefore no disruption to the natural surroundings, no influence to the motorway traffic, low emissions for noise, CO2 and fine dust, technically and economically it was a sensible solution. Also a clear decision for the contractor Bahnsen Tiefbau GmbH & Co. KG, who had the relevant equipment, the experience and necessary know-how. The contract was established in no time, the Bahnsen bore team arrived at the scene very quickly. In order to find out, whether their ever-reliable and precisely working GRUNDODRILL 15XP could realise such a long bore in the prevailing ground (soil classification 3-4), the Bahnsen owner and team leader Paul Baumann had previously carried out a bore at a 1,5 to 2,0 m depth over a length of 430 m. This ran extremely well, proving they could start this project right away.

For this task Bahnsen chose a special 3-finger bore head (Ø 125 mm) as bore tool for the GRUNDODRILL 15XP and built a backreamer for upsizing the pilot bore. With it’s very compact dimensions, the midi HDD rig has low working space requirements – here in the small village of Gottrupel in the tight lanes, this was a big advantage for the starting pit. After everything had been set-up and the drilling fluid mixture had been determined, it was time to start the pilot bore. The 3-finger bore head easily passed through the light to medium displacable soil. The underground allowed steerability without any problems and the bore progress was continuous.

When crossing beneath the A7 motorway everybody held their breath for a while: after all the bore head was now working it’s way horizontally at a sole depth of 7 m, metre for metre and „blind“ beneath the motorway. The Head of Motorway Works were uncomplicated and accepted a blind bore, relying totally on the experience of the bore crew. After an unbelievable 469 m length the pilot bore reached the target pit without any problems whatsoever – a new bore length record for the Bahnsen bore team and also for the GRUNDODRILL 15XP! Even the blind bore underneath the motorway looked like becoming a new record: the height difference from the starting point at the A7 to the measuring point at the end of the A7 was a mere 1 cm. Respect!

Upsizing of the bore path with the backreamer and the simultaneous pulling-in of the HDPE pipes and Multi-pipes was carried out smoothly. The pure installation time was 11 hours, which equals 42,6 m/h – that’s pretty fast. Maybe the bore team will have even more similar challenge during further broadband extensions in Handewitt. Who knows, maybe more records are waiting to be broken?
Overview